Take your sailing gloves on holiday 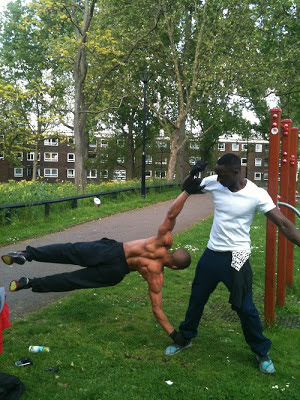 Sometime this year I am planning to take a break from sailing and go traveling with the family. I have been thinking about how to stay fit as I won't have access to my bike or local pool or the ultimate exercise machine the laser dinghy.

There is a growing trend to exercise with your own body weight and I just found this article in the online version of the UK's Guardian newspaper.

It about  Spartanfam started by Chaka Clarke who learned his way of working out in the army. With mortar alarms and camp excursions in Iraq constantly interrupting his fitness regime, he developed a more flexible approach: "I started doing pushups in my tent, pullups on the tank barrel and on the side of the bulldogs, the armoured fighting vehicles that we had, doing squat jumps, just messing about."

One of their stunts is hanging sideways off whatever comes to hand – lampposts, scaffolding, his friends – performing a bodyweight exercise called the "human flag" that entails gripping a pole and holding yourself parallel to the ground.  I will pass on this one.

The military seems to a source of these kindhs of excercise routines, probably out of necessity. I remember my parents generation in the 1960's getting into 5BX an exercise program developed for the Royal Canadian Air Force, which also essentially relied on the principle of exercising without gym equipment.

Spartanfam has a series of videos on youtube demonstrating their exercises.  I like this video because it uses the kind of facilities found in hotel rooms like doorways and couches.

They also wear gloves, similar to my laser sailing gloves, so I will now need to put them on the packing list.