This item was posted on CSIRO's blog on the 16 August.

CSIRO’s detailed wind forecasts have helped the Australian Olympic Sailing Team win gold at the 2012 London Olympics.
Scientists from CSIRO and the Australian Institute of Sport worked together to apply CSIRO’s expertise in fine-resolution atmospheric simulation to provide very detailed wind forecasts for the Australian Olympic Sailing Team.
Success in competitive sailing is a combination of tactics, skill, practice, best boat technology and accurate wind forecasts. The Australian Olympic sailing team possess all of these traits, but scientists at CSIRO gave them a significant tactical advantage through their application of the Conformal Cubic Atmospheric Model (CCAM) to provide high-resolution, near time forecasts of conditions expected on the sailing course.
Dr Jack Katzfey, from CSIRO Marine and Atmospheric Research, says CCAM was originally developed to generate regional climate simulations using high-resolution space and time technology.  It can be adapted to accurately provide detailed wind forecasts anywhere in the world.
“The weather simulator is based on a projection of the world onto a cube, which through its unique formulation can be ‘stretched’ in order to provide high spatial resolution over any portion of the globe,” he says.
The Australian Olympic Sailing Team’s meteorologist, Dr Bruce Buckley, interprets these forecasts, along with other sources of meteorological information, and presents them to the sailing team and their coaches prior to a race in order to give them the best possible chance of success.

Three dimensional plot of surface topography at 220 m resolution with an example of the forecasted wind streamlines (white lines) and speeds (colour, blue lighter winds, yellow/reds stronger winds) over water. Figure demonstrates the detail in the 220 m grid and forecasts. Circle indicates a race area.
The technology had been used in the Beijing 2008 Olympic Games and leading wind forecast website ‘PredictWind’, as well as contributing to the success of the Swiss sailing team, Alinghi, at the America’s Cup in 2003 and 2007, as well as helping Australia win gold in London.
“Most forecasting systems enforce artificial boundaries that can make their wind forecasts less accurate,” says Dr Katzfey.
“Our forecasting model uses innovative technology that gives us the advantage of creating a ‘stretched grid’ that provides a highly detailed wind forecasts at spatial scales of 220 meters. Being able to use this technology gave Australian sailors a unique advantage in the London 2012 Olympics.”
The SCIRO also crashes dummy cows, our strategy for gold in 2016.

The home of the  Australian Olympic team is the MHYC, my local yacht club at the Spit in Middle Harbour. We sail on Wednesdays, the day the team returned home. The media was also there. 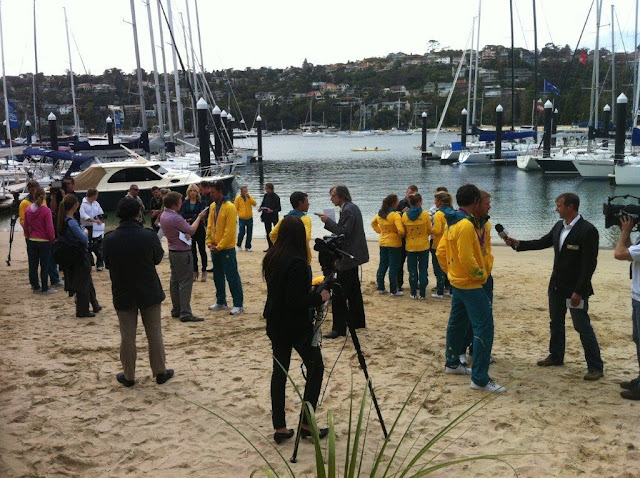 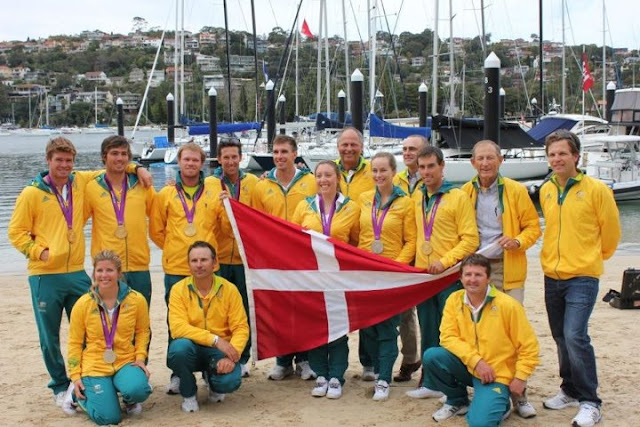 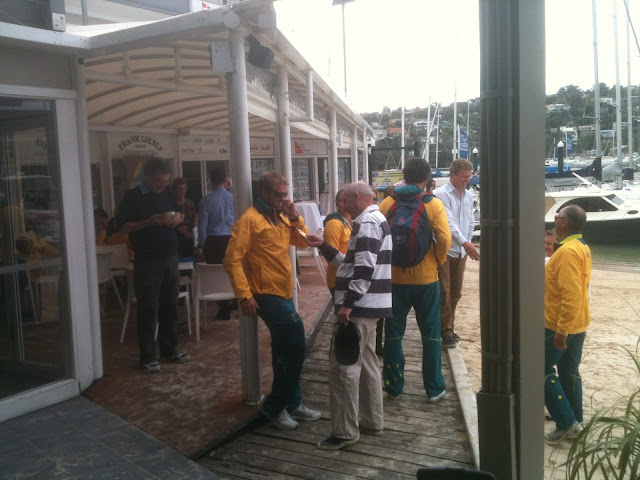 Laser 176894 and I have been sailing now for  four months and good progress has been made. Thirty practice sails have done. I have joined the local laser club and met some of the winter sailing  members. Everyone has been very friendly and helpful for this newbie laser sailor.

My old road bike and the wife’s stationary bike are now in regularly use and I have increased my weekly swim to 3km. I have lost a few kilos, but still have lots to lose to get to an ideal weight.

I sail a lot by myself and some misadventures are inevitable.  I have had two in four months.  I was caught in a storm in April, my fault for not checking the weather forecast properly, lesson learnt.

Last week the top section of my mast broke and I had to walk the boat along a long difficult and rocky shore line and then hand paddle across Middle Harbour at the Spit. My boat is10 years old so the original spars were going to break sometime, it is good that it has happened now and not during a race.  In the process of converting from radial to full rig and replacing the top section, I now have a set of new full rig spars, which should reduce the risk. When the new and more reliable carbon fibre top section is approved I will buy one just to have peace of mind on lone sails. For now I will take a paddle with me every time I sail alone.

Sydney Harbour is a long and complex waterway and I can go a long way from home when chasing the waves down wind. One day I am going to get caught on the wrong side of the harbour too far from home, so I might also put a cab fare in my life jacket pocket.

The  weather here is starting to improve, the days are getting longer and warmer. I can't complain, by picking the good days, I have sailed a couple of times a week over autumn and winter, just in a wetsuit, boots, sailing shirt, and life jacket and yet to get cold.