World Sailing's Evaluation Panel assessing single handed boats for the 2024 Olympics used a scoring matrix, the overall scores are RS Aero 80% and Laser 69%. The Melges 14 scored 54% and the D Zero 52%.

It will be interesting to see if World Sailing accepts its Evaluation Panel's recommendation.

What ever, it's time to update to a well designed modern boat, the RS Aero. There are supportive clubs and efficient suppliers all over the globe. 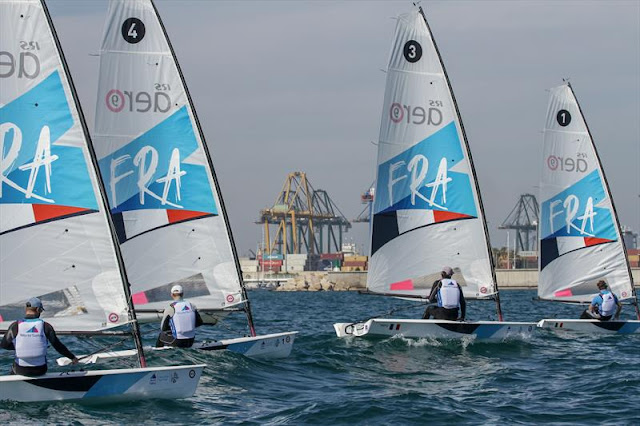 Laser Performance and ILCA in Dispute

On March 27 the ILCA announced it had ended its relationship with Laser Performance.  This comes as World Sailing reviews the single handed boat for the Paris Olympic Games 2024.

The two statements are reproduced below.

EurILCA executives and the European representatives at the World Council, Alexandra Behrens, Heini Wellmann and Jean-Luc Michon have issued a statement regretting the decision. "We have proposed to be the mediators between ILCA and LPE for a few months. Europe represents almost 70 % of the sailors of the Laser class members and big European districts like Germany or Italy have almost the same number of members as North American region (USA and Canada together). We are sorry about the situation and regret that our proposal for mediation, which we believe would have been in the best interest of the European sailors, was rejected."  Full statement

Update 6 April
ILCA answers questions received from ILCA members and dinghy owners. It is clear from these responses that the ILCA is attempting to establish FRAND based equipment manufacturing to satisfy one of the criteria from World Sailing for selection for the 2024 Games.

WIKIPEDIA
Reasonable and non-discriminatory (RAND) terms, also known as fair, reasonable, and non-discriminatory (FRAND) terms, denote a voluntary licensing commitment that standards organizations often request from the owner of an intellectual property right (usually a patent) that is, or may become, essential to practice a technical standard.[1].

LASERPERFORMANCE RESPONSE TO ILCA
STATEMENT OF 27 MARCH 2019 2 April 2019
LASERPERFORMANCE (“LP”) finds the recent events deplorable as well as potentially catastrophic for the Laser sailors and the class organization as configured today. It is important to know the background to the current dispute.
The falsehoods and misrepresentations contained in the official ILCA announcement are disturbing since they reflect on the class organization and bear on the credibility of governance of the class.
LP makes the following statements and responds to ILCA’s misleading statements:
▪️ LP has granted ILCA certain rights to use the Laser Trademark for its activities pursuant to an intellectual property license dated February 1998 (the “1998 Agreement”).
▪️ LP has been seeking a renewal of the 1998 Agreement which expires after multiple extensions on 31 August 2019.
▪️ ILCA has steadfastly refused to enter into a renewal agreement of like substance and has refused to have any meetings with LP on the matter.
▪️ LP refused to have ILCA undertake an inspection of LP’s facilities five months before expiry of 1998 Agreement and after three years of ILCA refusing to renew its license under the 1998 Agreement.
▪️ LP does not and has not refused inspection of its manufacturing facility or its products by other legitimate regulatory bodies. Indeed, LP has formally requested World Sailing to inspect LP’s facility given that they are the ultimate authority for compliance and the issuance of the boats’ plaques.
▪️ ILCA has not shared any of this with the sailors nor have they proposed how it would operate without a valid license from LP after August 2019.
▪️ ILCA is not legally able to seek new manufacturers for Laser products in LP territory without LP’s consent. LP territory covers the world excluding Australia, New Zealand (PSA) and Japan, Korea (PSJ). This is a simple matter of ownership of intellectual property and LP will enforce against any party who attempts to violate LP’s intellectual property rights.
▪️ ILCA can indeed appoint new builders in Performance Sailcraft Australia (PSA) and Performance Sailcraft Japan (PSJ) limited territory; however, neither of them can supply boats into LP territory without LP’s consent.
▪️ PSA has tried in the past to import illegally into LP territory by a variety of schemes. LP has successfully enforced its property rights against PSA and will continue to enforce its rights against PSA and any collaborating dealers or persons. The last of such legal action was in Belgium and it was adjudicated in favor of LP with the dealer involved filing for bankruptcy to avoid payment of award pursuant to the court judgment.
▪️ PSA is unable to supply LP’s output even if they could legally sell into LP territories. Indeed, the last time PSA agreed to support a class event – also a World event – was the Youth Worlds 2016 in New Zealand with 105 boats which ended up in PSA withdrawing its support three months before the event.
▪️ PSA’s withdrawal meant cancellation of the event except for WS reaching out to LP to step in both to save the event and to prevent the adverse effects a major cancellation impacting the Olympics standing of Laser.
▪️ The 2024 Olympic is in Paris, France – an LP territory and LP can be the only authorized supplier of Laser boats at such event.
▪️ ILCA decertifying the most established and the original manufacturer of Laser sailboats will not end the supply of LP Lasers to our markets. However, it will signal to the Olympic authorities that the most popular Olympic sailing event has poor governance and leadership, leading to unpredictable supply.
▪️ LP, in partnership with its outstanding dealership network, has consistently shown that it is the only supplier that can consistently provide support to events and sailors at a global level.
LP proposes the following to prevent the implosion of the Laser class organization:
A. ILCA sign the renewal agreement to the 1998 Agreement in order to continue to use the granted trademark rights.
B. ILCA move back to Europe where 75% of Laser sailors live and sail.
C. ILCA appoint a professional executive team to run the class operations paid for by increased plaque fees charged to the builders.
LASERPERFORMANCE
2 April 2019

March 27 2019
International Laser Class Association Removes Laser Performance as Approved Builder
ILCA is seeking new builders to complement its existing network of manufacturers, the International Laser Class Association (ILCA) announced today. The move comes after longtime builder of the class dinghy, Laser Performance (Europe) Limited (LPE), breached the terms of the Laser Construction Manual Agreement (LCMA), which seeks to ensure the identical nature of all Laser class boats, regardless of where they are built.
“We’re disappointed to see such a long and productive relationship come to an end, but we had to move ahead in order to protect the level of competition and the investment for the 14,000 members of the International Laser Class and the more than 50,000 sailors around the world who regularly sail the Laser dinghy,” said Class President Tracy Usher. With its UK-based manufacturing facility, LPE was the ILCA-approved builder that produced boats for most of Europe, Asia and the Americas until earlier this week, when Usher says the class terminated the LCMA with respect to LPE after the builder’s refusal to allow inspection of the boats being built in their manufacturing facility as required by that contract.
“The very heart of our class is the ability for any sailor to race any other on an equal playing field, and the only way we can guarantee that level of parity is by ensuring that all builders are producing the boat in strict accordance with the Laser Construction Manual,” explained Usher, who said that LPE has unequivocally denied the class their right to access to LPE’s factory. “It’s the same for every class of one-design racing boat: if we can’t be sure that they are all the same, we have no class left,” said Usher, who said that LPE left the class “no option.”
Fortunately for sailors around the world, there are already two other manufacturers of class legal boats, one in Japan and another in Australia. According to Chris Caldecoat, General Manager of Performance Sailcraft Australia (PSA), his company is able to take up the slack if needed. “PSA has sufficient capacity to supply the market until new builders are appointed in Europe and around the world,” Caldecoat said. “We have and will always do what is right for the sailors and the sport.”
“Doing what’s right for the sailors” is really all that matters, according to ILCA Executive Secretary Eric Faust, who emphasized that there will be no disruptions to the the 2020 Olympics or to any major ILCA event. “Performance Sailcraft Japan will supply all the boats for the Olympic competitions in Tokyo, while the next two World Championships are in regions with Performance Sailcraft factories. These are existing, class-approved builders so we expect no issues,” said Faust. “We’re confident that we’ll see new builders coming on line soon, and that we’ll once again have a robust dealer network around the world in plenty of time for the lead up to the 2024 Olympics,” he added. With PSA and PSJ supplying boats and parts to sailors formerly served by Laser Performance over the next few months, Faust expects the disruption to class owners to be minimal or non-existent.
ILCA understands that many of our sailors will have additional questions about this news. Please know that we plan to post a FAQ with more detailed information soon. Finally, ILCA would like to thank all of our sailors, coaches, members and enthusiasts for their support of the class over the years and we look forward to a prosperous future ahead.
Posted by Nick at 2:56 PM 2 comments:

(wikipedia)    Adaptive reuse refers to the process of reusing an existing building for a purpose other than which it was originally built or designed for. Adaptive reuse is an effective strategy for optimizing the operational and commercial performance of built assets.[1] Adaptive reuse of buildings can be an attractive alternative to new construction in terms of sustainability and a circular economy.[2] Not every old building can qualify for adaptive reuse.

Architects, developers, builders and entrepreneurs who wish to become involved in rejuvenating and reconstructing a building must first make sure that the finished product will serve the need of the market, that it will be completely useful for its new purpose, and that it will be competitively priced.[3] 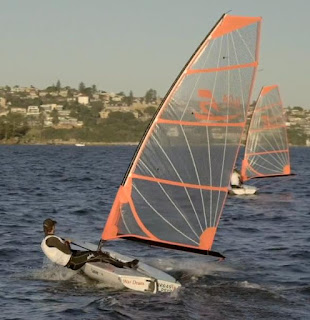 An interesting discussion has came up on Yachts and Yachting about the new C5 sail for the Laser.

It highlights the impossible dilemma facing the Laser class. How to adapt a 50 year old dinghy design to compete with modern dinghy designs and materials such as the RS Aero.

The easiest fix for the Laser is the sail and spars. The C5 simply slots into the existing mast step hole.

The new sail should be faster, unless it is detuned like the MK2 sail. But where does that leave club racing where some boats have the old rig and some the new.  Club fleets will be split with some willing to spend a fair bit to upgrade to a new sail, mast and boom.

Does a new rig fix the problem?  The hull is still 59kg twice the weight of the RS Aero, the foils are still old fashioned with heavy weather helm, the flat deck is still uncomfortable, the cockpit is still not self draining.

If we were architects or developers and this was an old building we would ask the question - is a renovation of the Laser an effective strategy for optimizing the operational and commercial performance of built assets.  For the ILCA the answer is yes, unlike a real estate, there is no land to sell or develop.

For sailors the answer is no, the Laser platform is not worth renovating.

And for Laser clubs, time to consider how to manage split fleets, maybe time to transition to a modern boat like the RS Aero.